Clashes between nations and geopolitics lead to human tragedies. Our District is particularly committed to welcoming Ukrainian refugees. L'Echo has decided to publish an exclusive interview with relatives of Ukrainian prisoners. For the security of the persons, we have concealed the identity and qualities (ranks, regiments, etc.) of the persons mentioned and their families. As we publish this article, a new exchange of prisoners has taken place.
Share on facebook
Share on twitter
Share on linkedin 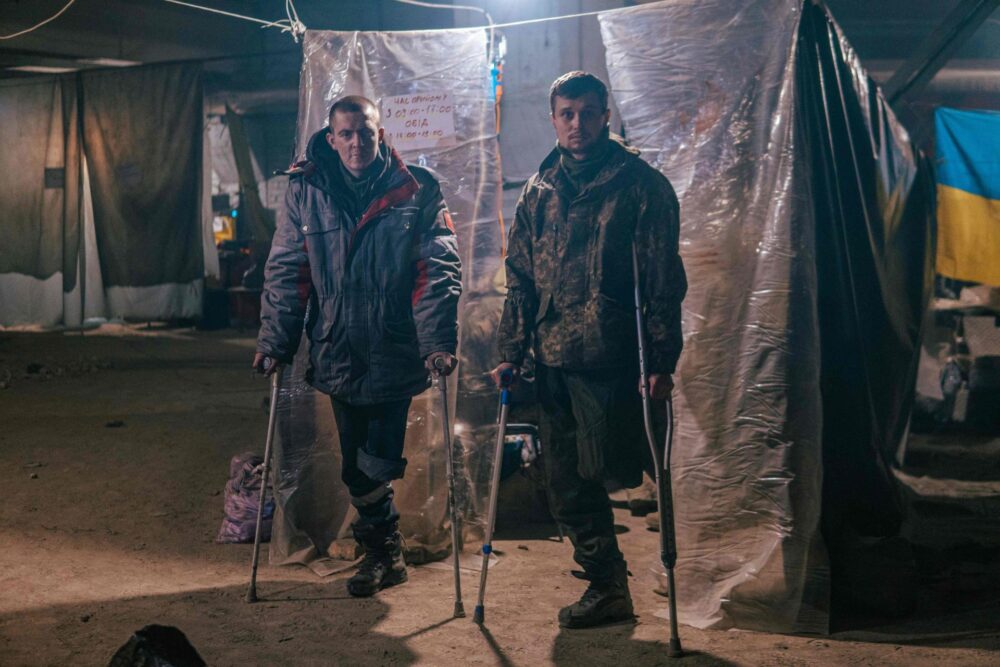 EDM – Can you present your organization? How did you get the idea and the courage to create this organization to support the families of Azovstal fighters ?

Azovstal families – The association includes members of the families of Azovstal fighters. This organization was not created immediately. The first step was a big meeting with families, when many soldiers and civilians were surrounded by the Russian army at the Azovstal factory in the city of Mariupol (note: March 18 to May 20). A soldier’s wife and three other relatives of soldiers have sent a letter to the Pope asking for help in releasing the prisoners because the behavior of the Russian side towards the prisoners is devoid of humanity or religious consciousness. At the beginning of May, the creators of the association went to Rome, because they had received a positive response and the support of the Pope. Unfortunately, it was not possible to release all those who were on the territory of the factory. During the two months of military and civilian occupation, almost all civilians were liberated, but there were still 2,500 soldiers left. These were sent from the factory directly to POW camps. On May 20, all the families completely lost contact with their loved ones. The parents then began to unite even more, and on June 1 and 2, the wife of a fighter created the Azovstal Families association. On June 22, the organization, which raises funds to help the relatives of detainees, in particular those who could not be sent back alive, or those who returned following the exchange of detainees on June 29, 2022 , was created. The association provides both social and material assistance, as well as psychological support, rehabilitation programs, etc. It also organizes various activities to raise funds, such as, for example, the sale of postcards, the organization of exhibitions with photos that were taken during the siege at the factory, but all this turns out to be insufficient to the needs of most prisoners who have been exchanged. The latter are in critical condition, they have been deprived of food for a very long time, they have amputated limbs or suffer from very poor health. A lot of funds are needed to bring them back to normal physical activity, not to mention psychological follow-up. In addition, the foundation is engaged in non-public activities, which cannot be disclosed for security reasons.

After the battles of Mariupol, in particular in Azovstal, do you know where the combatants still prisoners are ?

The prisoners who arrived on June 29 for the exchange were transported from the territory of the Donetsk region occupied in 2014, which the Russians call the DNR « People’s Republic of Donetsk », from a prison in the small town of Oliivka. During this time, many videos were released by the Russian camp, in which the prisoners were seen communicating as if they were drugged and suffered from speech disorders. On July 29, the Russians blew up a prisoner of war camp, 53 people died. According to two relatives of soldiers held in Russia, the prisoners are not only in Russian-occupied territory in Ukraine, but also in various cities in Russia, far from Ukraine’s borders. This fact has long been discussed at the state level in Ukraine, but unfortunately, the Russian side still does not enter into negotiations regarding the next exchange. Some of the prisoners are in the territory of the city of Novoazovsk, occupied territory of the Donetsk region since 2014.

International media claimed that Ukrainian soldiers had been exchanged for Russian prisoners: can you confirm this, and how many? Do you have information on their daily life ?

The exchange involved 144 Ukrainian soldiers, 95 of whom were defenders of Azovstal, 43 of whom belong to the Azov regiment. Unfortunately, to date, there has only been one exchange. I can’t say they’re doing well, they’re definitely not. Most are in a difficult situation, both morally and physically. They suffered serious bullet and shrapnel wounds, burns, broken bones, amputations. They all received help at the same time, but the reserves in Ukraine are insufficient, the war takes away all possible resources. We try to limit the presence of journalists, and even family visits are limited to certain fighters, because these people have lived through the horror and their psyche has suffered a lot. They lived 2 months underground with a glass of water per group, 3 spoonfuls of porridge a day, without any protein. My companion has lost 14 kilos, some have lost more than 20 kilos. According to the words of the prisoners exchanged, the conditions in captivity are simply unbearable. For example, if it is an amputation, the doctors use bandages, they do not provide the necessary care. In Ukraine, we had to amputate some soldiers again. The premises were cramped, stuffy, they slept on the floor.

Social networks are mobilized so as not to forget the Ukrainians who are in captivity in Russia: do you know if the UN or other human rights organizations are trying to put pressure to speed up their release or at least to offer them better conditions of detention ?

Sadly, all we have seen is a tweet from the UN, as well as the Red Cross collecting information on the chronic illnesses of prisoners. But we haven’t received support openly for a long time, so we want to use the media to get attention and help.

To support the association :